There are so many talented male polers in the world! And we bet, that a critical amount of them is from the ex-Soviet states. Let's see, who are on the shortlist of ex-Russia's best male polers and what the hell they're doing there?! 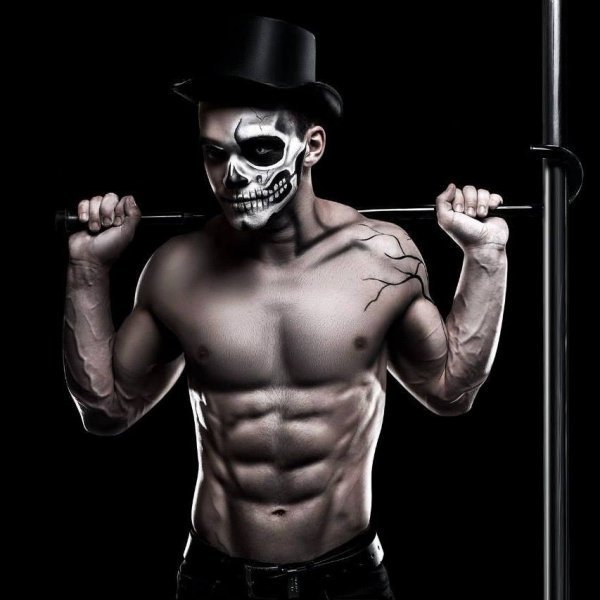 He became famous as the winner of the elite male category at PoleArt Italy 2015. As former break dancer and parkour, his unique style is based on unusual and surprising (sometimes even shocking) acrobatic tricks. He never runs out of energy or strength. We hardly ever can see him shorts (he says, he doesn’t shave his legs), so the biggest question is, how he can stick to the pole at all?! Recently, we saw him in Russian split, while Marion Crampe was sitting on him, in ordinary split. How stylish!

Dimitry likes pole because it gives him freedom. He never had any teacher, everything he learnt was taught by him to himself.

Our favourite routine from him is the one performed on Pole Art Cyprus (mostly because of the very impressive acrobatic-style opening and the end, drawing a big heart with his fingers into the air), placing him the second.

Beside all the above, Dimitry used to play doubles with Yulia Bozina as well. Fortunately, they have never applied for any international competition yet. Fortunately, because they would definitely beat everyone else with their crazy combos and tricks! And now, there is a rumour about Dimitry and Pink Puma’s double routine too… well, let’s see!

His Insta and Facebook videos of extreme pole tricks have been impressing us for a while. Practically, he is challenging the basic principles of physics. He is keen on wearing warm-up suits and caps, also filming himself with dudes. His signature trick is the one-handed Iron-X o the static pole. And finally, in February you may meet him in Europe too!

Evgeny and pole have been friends for ages. Most of us from Hungary may recall his awesome and funny winning routing of the World Pole Dance competition, mixed with superhard tricks. For years thenafter, him and Anastasia Skukhtorova used to be a couple and also two great artists inspiring each other. Recently, he’s shown up with Maria Bogomolova (alias Kira Noire): there unique idea and routine about Eva & Adam at IPC 2015 convinced the judges very soon and resulted in a gold medal for the newly formed doubles.

Artem’s big entrée has happened on Pole Art Cyprus in 2015. In his routine, he was a homeless person and meanwhile amusing us with unbelievable combos.

The 27-year old, very religious, Russian ex-football player has transformed into a poler so successfully that in 2012 he ranked immediately no. 2 in World Pole Sport Championship with his incredible Spiderman routine (also won the best tricks and best costume award), while in 2014, the gold medal and the best tricks award. Currently lives in NYC and regularly posts street pole videos on Insta. His most popular video’s called: Impossible is possible:

He loves speed and cool cars. His other love is running. Just check this Nike-style video:

He is also very committed to the pole education of the young generation. Recently, he can be seen with her newest talent, Emily, boosting pole as sport.

Dimitry used to make countless funny pole videos. We assume, he started as a gymnast originally. Currently, he teaches at Pole Action in Harkov.

His names sounds like a Russian one, but comes from Israel. Among other stars, he seemed to be the biggest surprise of last year’s Pole Art Cyprus, by performing a perfect routine about a very moving holocaust story. With the same routine, he has just won Pole Theatre Paris’ Drama category.

Most likely, if we say Alex, you know, who we are talking about. Nevertheless, only a few of us know that he started pole dancing because of the need of substituting her beloved wife, Katya on her pole classes. Then he became a fan quickly. In one year, he turned out to be the winner of WPSC 2013. In 2014, he had injuries, so he placed „only” the third at WPSC. He loves to compete in art categories as well, and he has lots of medals. To him, performing is the key word. He seems to prefer using scary or grotesk faces as well. Last year he used to be guest performer of Sziget Festival in Hungary. He is open-minded, also acknowledged as a dancer. His home studio is Manhattan, to be found in Kiev.

Alex never rests: at the end of February 2016, he organizes his ever first pole competition, called Pole Dance Championship in Prague, where best (pole) dancers of the world will perform. It’s a kind of unique competition that we have never seen before: the routine has contain 50% dance and 50% pole. Otherwise, no limits.

Privates and semi-privates are also available! Inquire by e-mail: info@poletheatrehungary.com

Privates and semi-privates are also available! Inquire by e-mail: info@poletheatrehungary.com

A real pole position: Pole Positions Moscow » I never watch my own videos – interview with Anna-Maija Nyman » "Everything should be in harmony" - Evgeny Greshilov »