"Even the best performer fails sometimes" - interview with Natasha Wang

She used to be White Snake, vampire, warrior - but in real life, she's just a very nice cat lover, who likes wearing oversized but comfortable clothes. Interview with Natasha Wang. 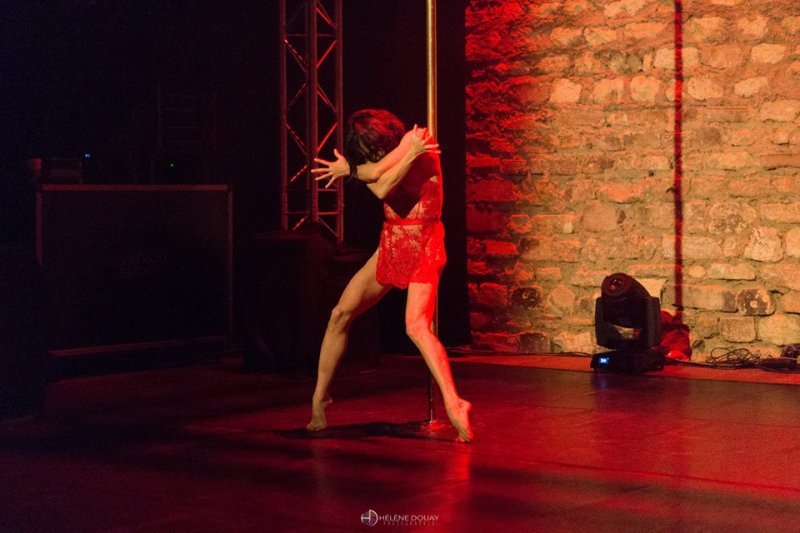 The planned circumstances of the interview changed again, but after Hanka I’m not surprised at all. Instead of Pole & Dance, we ended up in the Thai restaurant again, this time with Natasha Wang, Lolo Hilsum and the teachers of Pole & Dance. During the endless French chatting, I’m the only one trying to join the happy conversation in English. The topic is mainly the previous day’s Pole Theatre Paris, but also about explaining a certain grammatical structure in French of which Natasha was not previously aware. Now, she understands and is happy with her new findings.

English is my mother tongue, and Mandarin Chinese also. Although I was born in Texas (U.S.), my parents are from Taiwan. As to French, I studied it in high school and did a six-month study abroad with a family in La Roche Sur Yon, France. While at University I also spent a year studying in Lyon. So I had time and chance to polish my knowledge.

So, France has been close to your heart then already… Could you name any routine that you really liked during Pole Theatre Paris?

Yvonne Smink’s conception was very unique. I must admit, we were all very excited about what a pole sport athlete like Yvonne would do in this category. Well, we were completely amazed. In the Classique category where exotic-style pole dance is expected from the contestants, everybody wanted to show mainly their sexy side, even though it represented only 10 points in the total scoring system. Yvonne was not only sexy but very creative and brave in her tricks, showing us combos we’ve never seen before.

I also liked Dima Shevchenko’s World War II routine: it had a beginning, a middle and an end. It had dance, art, tricks, performance, acting and a story. It was clear. He’s such an amazing pole athlete and actor.

You also had a showcase between the Drama and the Comedy category. It was about love, and you practically had less than 5 minutes to get up from the jury, change your dress and warm-up. How did you manage this?

Well, you are right, that was tough. I only had time for some arm circles and jump squats to get warm. Fortunately, I do can splits without any warm-up, but for everything else – I really need to be warm.

Is this the first time you’ve judged Pole Theatre?

No, I also judged Pole Theatre USA, in Boulder, Colorado.

And how does it feel to be a judge one week and a competitor the next?

This is a small village, you know. Sometimes it’s me doing the judging, sometimes I’m the one being judged. The most important thing is that I accept someone else’s decision and don’t take it personally. Even if we’ve been familiar for a while, even if we’re friends in ordinary life, the decision is not about me as a person but as a competitor. Even the best competitor fails sometimes. That’s normal. Even I’ve had some very bad performances. But it all just makes me work harder so I can perform better next time.

When did you first start pole dancing?

It happened 10 years ago. Before then, I had no background in sports or movement. Ok, I had a very short career on my high school’s volleyball team, where I was that typical “benchwarmer,” sitting all the time on the bench, while the others were playing. My coach just realized after a while that it was safer if I sat there... After that negative experience, I decided I was done with sports. I think because I never had to battle with weight problems, I somehow assumed I didn’t need to exercise. After graduating from University, I worked as a publicist for nine years. One day my girlfriend suggested we attend an introductory class at a local studio and the rest is history. So, mine is a very ordinary story. Anyway, during this time in LA (and in the world, really) didn’t have many pole studios and pole dancing was not developing as rapidly as nowadays. I started at Sheila Kelley’s SFactor, where after four years the most difficult trick I could do was Shoulder Mount and tricks like Butterfly and Outside leg hang were at that time, not  taught… It was a different time then.

What were you the most frightened by on the pole?

Basically of injuries, so I’m always very cautious and practice all tricks very precisely. Recently, I taught a private class to Yvonne [Yvonne Smink – Dutch pole star, overall winner of Pole Theatre 2016], and to my surprise she admitted that she is also at times scared of fast dynamic movement, which is strange because she seem to like dangerous tricks very much. Then she told me that as a former rock climber, she learned that she has to be very thoughtful and careful, even on the pole. Dangerous tricks have to be executed step by step.

Does it look it? Well, good to hear. (giggles) But the international level is so high now, that many of my ‘scary tricks’ are actually considered pretty basic on an international competition-level now.

When do you have time to train at all?

That’s the point…when I’m on a teaching tour, I usually try to arrive two hours before my workshops to practice a little. So not too much time. For this reason, I wouldn’t apply for any championship now, where tricks like flips, etc. are expected from competitors. I teach a lot, I simply do not have enough time on the road to take classes and train myself. When I’m not on tour, I train at the Choreography House, where I teach also, and Be Spun, and often train with Sergia Louise Anderson and her instructors at The Vertitude.

You live in LA, how much time do you spend there?

Not enough. I travel a lot. For example, from here (in Paris), I go to Hamburg, then to Lyon, Mulhouse, Sargans and Gland, London, Nottingham, Bristol, Malta and finally I will end up in Sosnowiec, Poland. When on tour, I usually travel to the next destination in the mornings, I arrive and by the afternoon I have workshops already. At night I sleep a few hours and the next day it starts again from the beginning. Just like today, for example. I arrived in Paris only on Friday as last Sunday I had a showcase at Pole Show LA. And this summer, I will return to Europe again! Fortunately, my trips are organized by Poles on Tour, so at least I do not have to bother with the paperwork. And yes, the most important thing: my fiancée takes care of my cats. (smiles)