She's not that ballerina-type poledancer, nor a pole sport athlete. Never mind, she's simply mindblowing. At IPC 2015 she won the Art category with her Sherlock Holmes routine on the pole, recently she's performed Alice - and drove everyone crazy. Our exclusive interview with Kristy Sellars, overall winner of Pole Theatre Sydney 2016.

Why and how did you choose Alice in Wonderland?

I had actually been wanting to do in Alice in Wonderland themed show for a few years now. I first saw projection mapping dance about three years ago and started looking into how I could incorporate the pole and bring it to life around 18 months ago. It was VERY hard. I came across an animator online who had created projections for an Alice themed show and so I contacted him to see if he would be interested in working on the project with me. So I guess it was fate that I was thinking of doing a show based on Alice and just happened to come across Ryan's video:

Who helped with the music and the video? And did you have any help with the choreo?

Ryan Talbot - the young genius is responsible for the animations. And while about half of them already existed before we started on the project it took us about 4 months to bring together the show I performed at pole theatre. The woman behind the original show concept was Andrea Taylor, a teacher from Ryan's school. The choreography itself for this show actually took me a lot longer than usual. Some of the moves from the original could be used as they had to match up with the projections, but the 90% of new choreography I needed to create was definitely a challenge. It was difficult to create a dance that would make sense while incorporating the poles and dancing so close to the back screen without hitting it!

Didn't you get confused due to the video in the background? Was it easy to follow?

I just had to know the timing EXTREMELY well. I also practiced every part of it countless times so I was very aware of my space and where things would be on the screen. A lot of it I had to film and then watch back to make changes because I couldn't see it properly from the front when I trained it.

When did you finish your choreo? How much did you practice for your performance?

I finished it by the start of July. A lot had to be done by end of May because Ryan needed it to create the animations that would mimic me. Plus I toured New Zealand and Uk teaching throughout most of July so I had to be really organised. I'd spend about 4-5 hours a day on it. Not all physical though.

Similar to your performances, your studio is very special, too. How does it feel when you dance "under the stars" or in the forest?
PhysiPole started so small and has now grown to 10 locations across Australia. I'm very proud of it. It's always been important for me to be able to create spaces that inspire students, teachers and myself to be creative. And I do feel that every time I walk into them. 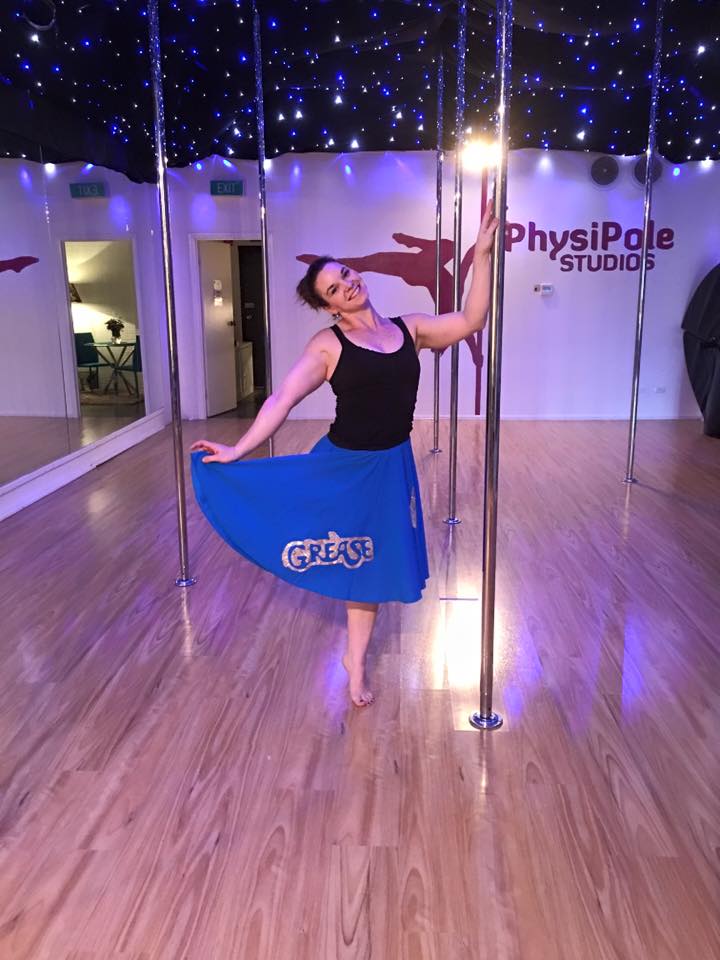 Getting back to your civil life, is it hard to be a pole dancer mom?
YES! Haha. I think any mother deserves a pat on the back. It's hard to find the balance between time to train or run a business and also look after your family. Personally it keeps me very humble, I know I have a lot of followers but at the end of the day I'm just mummy.

And what is your opinion about girls complaining about their body and saying: "yeah, I'm gonna start pole dancing after I lost weight". What would be your advice to them?
I always feel like that's the strangest thing to say... How about, start pole dancing TO lose the weight, you might even have some fun in the process;-)

Now, what are your plans for the future?
Ryan and I are working on a brand new show for Pole Theatre World!! Thus time the concept, song selection, choreography and performance will be by myself. AND Ryan is also making the trip to Prague! After that we will be starting a very big long term project. So keep an eye out!

Here's another worth-to-see performance by Kristy from Pole Art 2013, with a very unique concept, again.

2nd edition of Pole Theatre Hungary on 5th May 2018 in Trafó! Don't miss one of the most entertaining competition! Categories: Art, Drama, Comedy and Classique. Levels: Semi-Pro and Pro.